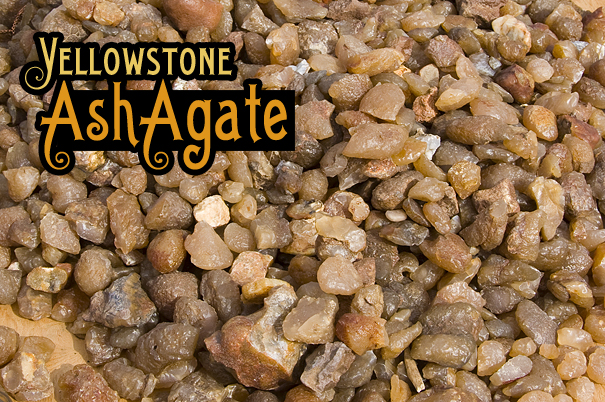 These yellow to orange agates, also known as Amygdules are found on a private ranch in the vicinity of South Pass, Wyoming near the Continental Divide.  Their formation in vesicles of volcanic lava likely occurred after the Lava Creek Eruption 630,000 years ago in what is now Yellowstone National Park.

These agates were created when rainwater leeched through volcanic ash concentrating SiO2 in the gas bubbles or vesicles in ancient lava flows.  After the lava was weathered away all that remained were these agates with a reverse impression of the lava as their outer skin.

What is an Amygdule?

Lava commonly contains bubbles of gas, which is no surprise because that gas is what causes lava to erupt. The empty bubbles left in the solid rock are called vesicles. Amygdules (a-MIG-dules) are what happens when vesicles later fill with secondary minerals.

Amygdules (often called amygdales by British geologists) fill with a number of different minerals, depending on the groundwater chemistry and the physical conditions underground. These amygdules are full of chalcedony or agate.

Notice that most of the amygdules are stretched, not round. These started out as spherical vesicles and were deformed while the lava was still fluid. Amygdules and vesicles thus can be indicators of movement in ancient lavas. A rock with amygdules is said to have amygdaloidal texture. The word comes from the Latin for "almonds" and refers to their typical shape.